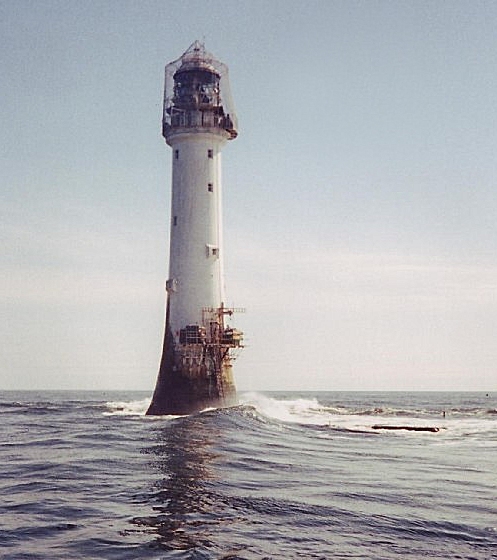 Off the east coast of Scotland lies a notorious reef, Bell Rock. This reef, which is only above water for a few hours each day, rests below the surface the rest of the time awaiting unsuspecting ships. The reef can be particularly treacherous in dark, stormy waters. With up to six ships being lost each year, thousands of lives have fallen victim to the rock through the centuries.

Then in the early 1800s, somebody got the bright idea to build a lighthouse on Bell Rock. It would be nearly impossible to construct a lighthouse on a reef that was submerged most of the time in dangerous waters, but Robert Stevenson was convinced it could be done.

The challenge, however, was not only in building a lighthouse that could withstand the onslaught of unpredictable waters; the task would be perilous for the builders themselves, too. If a sudden storm came up—or if they were stranded on the rock when the water began to rise (as almost happened once when one of their lifeboats broke loose)—they wouldn’t have stood a chance of survival in the frigid waters.

After several years of lobbying for permission and funding, Stevenson was given the go-ahead in 1807. Progress would be slow as work could only be done during a few hours each day for a few months per year, but the mission was finally accomplished by the end of 1810. Today, over 200 years since it was first lit in 1811, the Bell Rock Lighthouse still stands and has been saving lives all this time. Why? Because the light always overcomes the darkness.

Whenever darkness and light come into conflict, the light always wins out. As the apostle John wrote, “The light shines in the darkness, and the darkness can never extinguish it” (John 1:5, NLT). This, of course, is no surprise. We have all turned on a lamp and witnessed  light flooding the room. When John first wrote those words, however, he was not commenting on the physical properties of light; he was describing Jesus.

Whenever darkness and Light come into conflict, the Light always wins out.

Referring to Jesus as “Light” was not original to John. Centuries before Jesus was born, the prophet Isaiah foretold His birth, saying, “The people who walk in darkness will see a great light. For those who live in a land of deep darkness, a light will shine” (Isaiah 9:2, NLT). Jesus was the light to come to a dark, dreary world.

Jesus was the light who came to a dark, dreary world.

For all the darkness in the world—for all the evil, the pain, the disappointment, the heartache, the suffering, and the loss—Jesus is the light. He shines the darkness, cutting through it to provide hope and freedom and to illuminate the way to God the Father. Whatever you’re going through—whatever problems you encounter in life—Jesus can light your path and show you the way through.

For all the darkness in the world—the evil, the pain, the heartache—Jesus is the light.

Several decades later, John recorded the last words of Jesus that are included in the Bible. In Revelation 22:16, Jesus said, “I am the bright morning star”. What is a bright morning star? It is a fixed point in the sky that is always there, can always be trusted, and by which you can navigate your life. That’s Jesus.

Author Leonard Sweet compares Jesus to the North Star, which has guided travellers for millennia. The North Star has been vital for keeping people from getting lost and helping them to reach their destination safely. If you lost your way and didn’t know which way to go, the North Star would provide a fixed point to navigate by. Sweet wrote, “God lit up the skies more than two thousand years ago to show us how God can light up our skies today. Christians are people who live at the speed of light—the light of Jesus” (AquaChurch).

Jesus is the Light of the world. Darkness disappears in His presence. Allow His light to shine on you and permeate your life today.