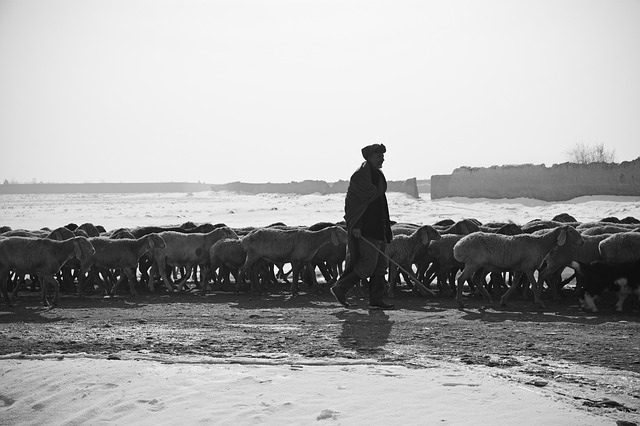 When you picture a shepherd out with his sheep, perhaps you picture him overlooking the sheep as they graze in a huge field with more grass than they could ever eat. In first-century Israel, however, that is not how it would have been. Rather, you might find small green patches of grass here or there surrounded by rocky terrain. In a region not particularly friendly toward growing grass, you might have to go through barren or dangerous areas to move from green patch to green patch.

While moving from patch to patch, a shepherd would not follow behind the sheep, poking at them and prodding them to go in a particular direction. Rather, he would go before them. He would lead, they would follow.

While leading, the shepherd would call to the sheep to trail behind him. Even though sheep may not be the brightest of animals, they are bright enough to recognize the voice of their master and to follow. If they didn’t, they might get left behind. If that were to happen, it could prove to be fatal for the sheep.

Likewise, when the Good Shepherd (Jesus) calls His sheep, they recognize His voice and they follow Him. Where does He lead them? The answer can be found in one of the most famous passages in the Old Testament: “The Lord is my shepherd; I have all that I need. He lets me rest in green meadows; He leads me beside peaceful streams. He renews my strength. He guides me along right paths, bringing honor to His name” (Psalm 23:1-3, NLT).

Jesus wants us to follow Him, and we can trust His leading. He will lead us to green pastures. Even if that means taking us through treacherous terrain, we can trust Him and follow Him as we listen for His voice.

Hearing His voice is not always easy, though. The pressures of life, our own pride, and our selfish desires can drown out His voice. So we must listen intently.

Consider the last time you were in a crowded restaurant, surrounded by noise, and still been able to carry on a conversation. How was that possible? Because you were able to isolate the voice of the person across from you. Or , if you chose, you could eavesdrop on the conversation at the next table by focusing in on their voices.

Likewise, you can “tune in” to the voice of Jesus. How? You can start by spending time in prayer. Praying is simply talking with God and carrying on a conversation with Him. Recognize that His Spirit is right there with you as you pray.

When you pray, invest time in silence waiting for Him to speak to you. As you do, you will begin to sense His prodding in your life. You will start to recognize Him speaking into your thoughts and heart. You will be able to hear His voice.

Newborn babies are completely unaware of the world around them. They do not really care who is there with them, as long as they are fed on time and their diaper is changed regularly. Before long, though, a child begins to recognize the voices of his or her parents… the ones who spend the most time with the child. Over time, the child will start to understand words and eventually to carry on conversations.

Learning to pray is similar. The more time you spend with Jesus, the more you will be able to recognize His voice and understand what He is saying. You will learn to converse with Him.

The more time spent with Jesus, the more you’ll recognize His voice and understand what He’s saying.

Another practice to help you hear His voice is to read His Word, the Bible. The Bible is a revelation of God to humanity. He has revealed Himself through the Scriptures. God speaks through His Word, so as you read you will be able to sense His leading and recognize His voice.

Other spiritual habits can also help you learn to hear God’s voice, including fasting, worship, memorization, silence, solitude, service, and more. But the basic habits of prayer and Bible reading are entry-level habits that help you become attuned to what God is saying. Then, when you hear His voice, respond by trusting Him, obeying Him, and following Him.