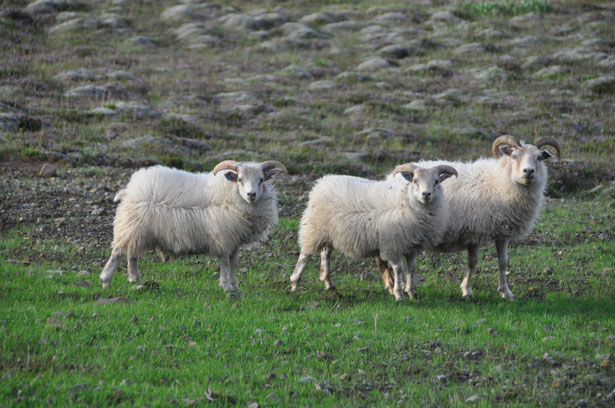 Jesus used an interesting analogy when He described Himself as “the Good Shepherd” (John 10:11). Sheep, which are not noted for their intelligence, tend to smell bad, they get dirty, and they are prone to wander away and get lost. Without a shepherd to watch over them, lost sheep often become snared by bushes, trapped and unable to escape. If a sheep does get lost and you go find it, you can expect it to wander away again soon. Sheep never seem to learn from their mistakes.

Being compared to sheep may not be the most flattering description of humanity, but could there be some truth to it? Sometimes we really aren’t all that bright, are we? And like sheep, aren’t we are prone to wander away from where we know we should be… particularly where we need to be with God?

On top of that, sheep are easily confused and frightened, with a typical storm often being enough to cause them to panic. When that happens, sheep have been known to throw themselves over cliffs. If one sheep goes, the rest of them will follow because sheep are followers by nature. There’s a reason the thesaurus lists “follower” as a synonym for “sheep.”

Like sheep, we often find ourselves frightened and confused when a storm of life arises. We might feel helpless and in desperate need of someone to protect us… sometimes even from ourselves. Tangled up in the busyness of life, we may find ourselves just following the crowd—even if that crowd is lost and headed in the wrong direction. Yes, there are some valid parallels that can be drawn between sheep and humanity.

Sheep desperately need a shepherd. They simply would not be able to survive without someone watching over them and protecting them.

However, while this does describe our reality, it was not the primary point of Jesus’ words. When Jesus described Himself as “the Good Shepherd”, His intent was not to tell us how hopeless we are. Rather, He was communicating how good He is. The emphasis was not on our helplessness but on His loving kindness. He is the Good Shepherd who cares for His sheep.

As the Good Shepherd, Jesus reveals His loving kindness.

“…The sheep recognize [the shepherd’s] voice and come to him. He calls his own sheep by name and leads them out” (John 10:3, NLT).

Remembering a person’s name signifies worth. It indicates that you have spent time with the person or you have intentionally learned their name. It means you care.

As the Good Shepherd, Jesus knows your name. In fact, He knows everything about you. He knows your likes and dislikes, your strengths and weaknesses, your habits, your personality traits… He knows everything you have ever thought, said, or done, and He loves you anyway. It was this love that compelled Him to take the punishment for your sins upon Himself on the Cross. That’s how much He cares for you.

In Luke 15, Jesus told a story about a shepherd with a flock of 100 sheep. One day, when he went out to count his sheep, he discovered one was missing. What did the shepherd do? He searched high and low for that one lost sheep, and he kept searching until he found it.

At one point in time, we were all like that lost sheep. We had wandered far from God—far from where we should have been—and Jesus came searching for us. For many of us, He found us.

Others of us may still be wandering like a sheep without a shepherd. If that describes you, Jesus is still searching. More than anything He wants to find you and bring you to where you belong. He wants to restore you into relationship with God the Father.