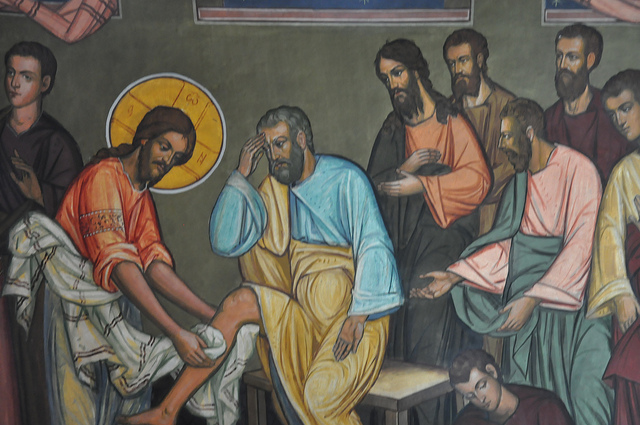 While Jesus was walking the earth, He talked a lot about the importance of serving. But Jesus did not merely pay lip service to the idea of serving; He modeled it. He set the standard and became the example.

Jesus did not merely pay lip service to the idea of serving; He modeled it.

Jesus traveled from town to town healing people, teaching them, reaching them and meeting their needs. He genuinely cared about people and did whatever He could for them. In John 13 this servant attitude is seen in action:

Before the Passover celebration, Jesus knew that His hour had come to leave this world and return to His Father. He had loved His disciples during His ministry on earth, and now he loved them to the very end. It was time for supper, and the devil had already prompted Judas, son of Simon Iscariot, to betray Jesus. Jesus knew that the Father had given Him authority over everything and that he had come from God and would return to God. So he got up from the table, took off His robe, wrapped a towel around His waist, and poured water into a basin. Then he began to wash the disciples’ feet, drying them with the towel he had around Him. (John 13:1-5, New Living Translation)

What a radical thing for Jesus to do, to wash the feet of His disciples. That was the job of a servant!

In Jesus’ day, the main mode of travel was walking. People could walk for hours each day while wearing their sandals and traveling across the dusty roads. So a custom evolved that, when a guest would enter a home, a servant would be there to wash the feet of the guest. Today, a host might take a person’s coat and offer them a drink. In the first century, they washed feet. It was a menial job—the kind of job that only servants or slaves would lower themselves to perform.

It was suppertime, so it was late in the day. Jesus had likely walked around teaching people that entire day. His feet and the feet of all of the disciples would have been caked with dirt. But on this occasion, there were no servants present to wash their feet.

Initially, they are sat down around the table. But after a while, Jesus took it upon Himself to wash His disciples’ feet. That would have been a radical thing for anyone to do, especially someone who was regarded as a great teacher and leader. In fact, it was so radical that His disciples began to protest. Peter in particular refused at first to let Jesus wash his feet.

Their response is understandable. Put yourself in their sandals: It’s the end of the day, you’ve been working hard, and you know that your feet are dirty and calloused and smelly. Then the one person you admire and want to impress the most wants to wash your feet? Like you’re going to let that happen!

But Jesus insisted that His disciples allow Him to wash their feet. Then when He was finished, He taught them the significance of what He had done.

“Do you understand what I was doing? You call Me ‘Teacher’ and ‘Lord,’ and you are right, because that’s what I am. And since I, your Lord and Teacher, have washed your feet, you ought to wash each other’s feet. I have given you an example to follow. Do as I have done to you.” (John 13:12-15, NLT)

Servanthood. Jesus modeled it and He demanded it of His disciples. He still demands it of His followers today.

Jesus modeled servanthood and He demanded it of His disciples. He still demands it today.