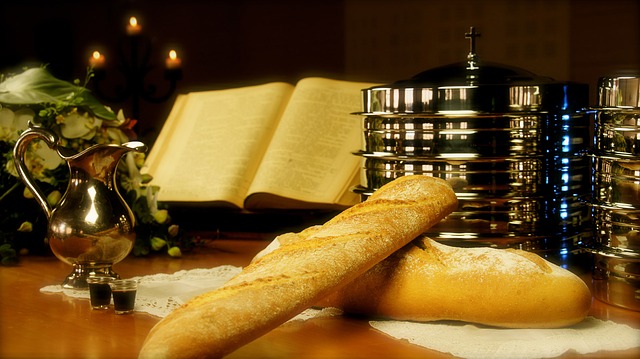 The practice of Communion—a common ritual that binds all Christians together—is perhaps the most meaningful and time-honoured tradition within the Christian Church. Throughout the past 2000 years, it has been practiced and celebrated by believers in all parts of the world.

Also known as the Lord´s Supper or the Eucharist, the practice of Communion is based on the last supper Jesus ate with His followers before the Crucifixion. During that meal, Jesus took the unleavened bread (representing His body) and His cup of wine (representing His blood) and used them to explain to His disciples the events that were about to unfold. Before long, Jesus would die a horrible death on a cross in order to exchange their sinfulness for forgiveness and eternal life.

The Bible explains how Jesus handed the bread and wine to each of those gathered around the table that day. Then Jesus told His followers to repeat that ceremony regularly. But while this practice has continued to the present day, it has taken various forms throughout the years. The elements used and how they are handled has varied from era to era and from church to church.

Originally, Jesus used unleavened bread. This is understandable, considering how He instituted Communion during the Jewish Passover meal. In recognition of the Passover, only unleavened bread would have been used. He also handed around a cup of wine. This was also predictable, since wine was a customary drink for Jews to have during their meal.

The early Christians essentially continued to serve Communion just as Jesus had done. As the Christian Church became established and began to expand throughout the Roman Empire, though, the practice began to evolve.

The Western Church continued to use a cup of wine but developed a stylized wafer to replace the unleavened bread. The Eastern Church, on the other hand, started using leavened bread, or bread made with yeast. The rationale was that the leavened bread represented the new life that Jesus offered.

During the Middle Ages, the Church began to limit those who could participate in Communion. Spurred on by the Apostle Paul´s warning not to take part in Communion in a disrespectful or irreverent way, the Church leaders began to partake in Communion while the congregation watched as spectators.

This became a major issue of the Protestant Reformation, as the reformers insisted upon offering the privilege of participating in Communion to all Christians. Though the Catholic Church continued to restrict Communion to only the leadership, the newly formed Protestant churches offered Communion to all believers by handing around a single cup of wine and distributing the leavened bread.

During the 1800s, Protestant churches became concerned about the impact of Communion on recovering alcoholics. With the increasing number of alcoholics that were being reached and brought into the Church, it did not seem appropriate to be serving alcoholic wine. Nor was alcohol suitable for children.

So an alternative was sought. Because wine was essentially the fermented juice from grapes, several Protestants began to experiment with ways to prevent the fermentation process. In 1869, Dr. Thomas Bramwell Welch—a Methodist dentist—discovered a process to preserve grape juice in its unfermented state. Welch´s Grape Juice—now a popular commercial product—was introduced as an alternative to Communion wine.

At this point, a single cup was still being used and handed around to all the participants during the serving of Communion. While this was not viewed as a major problem in small groups, it became increasingly obvious that it was not a sanitary practice in larger gatherings. With an increased understanding regarding the spread of germs and diseases, Protestant churches were forced to reexamine how Communion was being served. As a result, small individual Communion cups were developed and distributed in trays so that all the participants could have their own.

Today, two millennia since Jesus first introduced the practice, the message of Communion remains the same. The practice still calls to mind the sacrificial death of Jesus on the cross and the resulting forgiveness and life being offered to all His followers.

Communion recalls the sacrificial death of Jesus and the resulting forgiveness and life He offers.

Since Jesus simply used the items that were at hand, it would seem that the exact elements are not critical. The significance of Communion lies in the message, not the items used. While the methods may vary, the meaning is unchanged. It is a reminder for all believers about the core their Christian faith.